The City of Natal welcomed the first IEEE Smart Cities Summer School, on 6-11 August, 2017. A good opportunity for students, professionals and municipality representatives to work together on real use cases, and find ways of improving the daily life of the citizens.

Located between the Tropic of Capricorn and the Equator in the southern hemisphere, Natal in Brazil has a warm climate all year long, and is a good place to enjoy Brazilian beaches. The city has been recently affiliated to the IEEE Smart Cities Initiative, as a result of the expressive advances and strong engagement between academia and local government. Natal is on the way to be the cradle of a technopole focused on Information Technology. A project is involving the university and both public and private sectors as a propitious environment for diffusing science, technology, and innovation, besides contributing to the economic and social development of the city.

Close to the city centre, the Ponta Negra dune, Morro do Careca, became emblematic, and is now a worldwide trademark of the city. This is why it was reused to be on the logo of the first IEEE International Summer School on Smart Cities.

Opening on Sunday, August 6, 2017, and closing on Friday 11th, this event was hosted by the Metrópole Digital Institute (IMD), located on the campus of the Federal University of Rio Grande do Norte (UFRN). With the financial support of the Brazilian Computing Society, the IEEE Smart Cities Initiatives volunteers have been working for almost one year. They welcomed for one week more than one hundred registered attendees, including 23 graduated students, 46 undergraduate students and 47 professionals (including professors and city representatives, most of them from Natal) that registered. 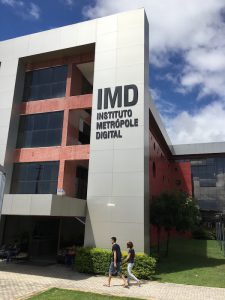 11 international speakers were giving keynotes during the 5 days of the course, addressing the technological, societal, political, innovative and entrepreneurial issues to be solved by Smart Cities.

A selection of students was able to submit papers (22 selected) and posters (9 short papers), as in IEEE conferences. They will be published in the Summer School proceedings. Topics range from ICT infrastructure to support smart cities to different applications, including mobility and transportation, agriculture, health care, open data, IoT, and so forth. Four prizes rewarded the two best theoretical papers and the two best application papers. They will find future applications in CO2 monitoring, smart parking, agriculture and cyclists security.

In parallel, OrbiCité was organizing an Innovation and Entrepreneurial module, including three introductory keynotes (Smart Cities, Innovation, Entrepreneurship) and a series of collaborative working sessions based on real use cases. Thanks to Natal municipality, nine were submitted, expressing 12 different problems to be solved for the city.

8 groups of students were constituted and were asked to work a selected problem from an entrepreneurial point of view, as if they were creating their own startup, and presented their project at the end of the summer school during a pitch session. Because of the attendance of many delegates from the City of Natal, it was a real co-construction effort that was performed by the groups.

One of the groups, with the contribution of Derrick de Kerckhove and Álvaro de Oliveira, worked on a case focused on the rehabilitation of the Ribeira neighbourhood, the historical centre of Natal. They developed a particular community engagement approach, based on the full integration of the refurbishment plan with the local population, and all the associated architecture, culture and tradition heritage. The action plan presented at the end of the summer school was mature enough to be the starting point of future actions.

This very short event showed that innovation can be dramatically improved and accelerated when teams work with people of multiple skills and professional profile. And when stakeholders are associated in the process, it results in accurate problem analysis and fast actionable solutions, to be experimented and validated within a short period of time.